Working in a kind of backwards direction, here is listed a variety of artist/producer hookups.

Current ongoing projects are firstly, Algorisms and secondly Eat logic. The paragraph headings link to project websites and a good deal more information pertaining to each one. However brief notes, to whet the appetite, are below. 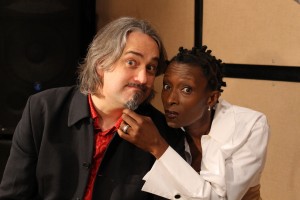 The brainchild of sing-ist Alison Limerick and keyboard-er Gordon Hulbert, Algorisms puts a unique spin on  jazz. Taking songs that speak to them, the long-time collaborators create personal interpretations and use them as a springboard for improvisation. Whether as a duo or centering a quartet, or septet, the music they make is likely to be immediate and fresh. Their aim is to reinvent the familiar without destroying the songs they love, this makes for interesting listening.

Please visit the Algorisms website where you can sample a little of their flavour (check out the link above the photo).

A Jazztronica project which combines electronic and acoustic elements with UK street idioms, jazz flavoured textures and improvisation. The players and singers have helped to define the sound of British underground music over the past two decades; members of some of the UK’s most groundbreaking bands join forces with vocalists who hold a firm place in the history of British acid jazz and electronic dance music.

Please visit the very nifty Eat Logic website for lots more good stuff including the  line up of the band. 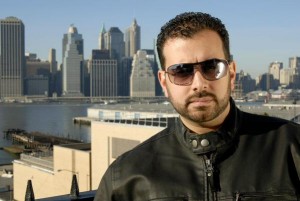 Another collaboration that stretched its legs in 2018 was a track made with USA producer/re-mixer Lenny Fontana. The song ‘Bye Bye’ was penned in the states but the vocal was recorded in London; such, long distance productions seem to be all the rage these days. With  Lenny Fontana at the helm and a sweet Phats and Small remix  the track was well received gaining a few good reviews and a warm reception from club goers in the UK and US. 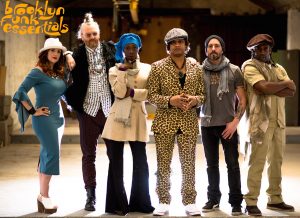 Early 2016 saw the first coming-together of The Brooklyn Funk Essentials (the brainchild of Lati Kronlund and Arthur baker) and Ms Limerick. After a separation of more time than would be polite to mention, the composer and singer of the classic ‘Where Love Lives’ – joined by a stage full of fine musicians – proceeded to rock the roof of Ronnie Scott’s Jazz Club, London, RIGHT OFF! Such was the success of that night, Ms Limerick was asked to join the band for a few more shows and thereafter traveled to France, Holland, Belgium, Finland, Italy and Sweden, sharing the band’s brand of eclectic, Jazz/Funk-fun with a lot more folk. 2017 equaled the successes of the previous year, with La Limerick a permanent member of the group and in 2018 the first single from a forthcoming album was released. More tracks will follow with the album due to drop next year. For more info about the BFE, go here.

In The Blood, a track co-written with the X-Press 2 boys, DJ Diesel (Darren House) and DJ Rocky (Darren Rock), saw the light of day back in 2012. Some damn fine mixes followed the original version – which nearly got canned as the boys didn’t think the song suited their album project. Don’t know what changed their minds but change it they did.  In The Blood (on iTunes). Released as a single the track also appears on the X-press 2 album ‘The House Of’.

Let Me Lead you To Heaven. A song that evolved out of an instrumental that had been getting some attention in Europe. Asked to write something that worked with the existing string theme the resulting song was a vocal departure from the deep contralto norm of Ms Limerick. Floating up at soprano altitude the melody nevertheless conveyed an energy and attitude clubbers recognised and took o their hearts. Philippe Lussan, Vlad Jocic and Yuhari Yamashita are the trio who make up And IF, the producers of the original song Finest Dream and the team who were not ‘too precious’ with their work to allow another interpretation to take flight. Let Me Lead you To Heaven (on YouTube).

IKON, one of many manifestations of the Elliot Irland and Alex Rizzo partnership. Pedigree Cuts, Jalapeno Records, Buena Ventura and Skeewif are but a few of the projects that carry their mark. Their association with Ms Limerick began while making her album on the X-es label but when the label failed they quickly moved on. IKON found use for a track originally written with Limerick for The album Spirit Rising but which did not make the cut. Reworked and remixed, IKON made Do You Dream? breathe again, giving it a new lease of life and a unique flavour – several flavours. Do You Dream? (on iTunes).

Full Flava used the talents of a bevvy of songstress to help create their album Colour Of My Soul (on iTunes). Sharing space with tracks by Ce Ce Peniston and Carleen Anderson, Perfect Love and I’m Not Giving Up (This Feeling) were to two co-written and sung but alison limerick. First released on Dome Records in 2003 the songs lean more heavily towards R&B than works recorded by her, before or since, although live performances often reflect La limerick’s willingness to embrace all forms of musical expression.

Close ties with Acid Jazz (both the label and the genre) produced a number of tracks with stalwarts of the idiom. The James Taylor Quartet single, Love Will Keep Us Together, even squeaked into the singles chart peaking at 63 in February 1995. A Good Thing and Stepping Into My Life, although not written by limerick were voiced by her and found their way firstly onto the JTQ album In The Hands Of The Inevitable then subsequently, like Love Will Keep Us Together, onto a host of Acid Jazz compilations. Vibraphonic another regular Acid Jazz combo collaborated often with Ms limerick and her voice found its way onto a number of their albums between 1993 and 2000. The collaboration only produced 2 singles, Trust Me, from the Album Vibraphonic 1 and Buck The System from the follow up album Vibraphonic 2. However those and the succeeding albums found room for a list of tracks co-written by Roger Beaugolais, the band’s commander and La Limerick – A Present Just For me, It Isn’t Magic, Nothing Comes Close and Be Careful, to name just a few.

Key of life, a Japanese band came over the ocean to England in order to work with Ms Limerick; a collaboration which resulted on 2 songs that appeared on their eponymous debut album.

Before all the rest, the studio based project This Mortal Coil – brain child of Ivo Watts Russel – utilised the singer’s voice more like another instrument within the multi-layered fabric of the production, rather than a featured vocalist. Singing only a handful of songs (or bits of songs) for Ivo’s remarkable project, two of Ms Limerick’s performances nevertheless found their way into the hearts of This Mortal Coil’s loyal fans, who still cherish ‘My Father’ from the album Filigree & Shadow and ‘Nature’s Way’ from the album ‘Blood‘. On both tracks Ms Limerick’s voice was given room and space simply to sing.

As a ‘jobbing musician’ Ms limerick has often been “Twenty feet from stardom”, having trod the boards with the likes of Elton John. She once rubbed shoulders with Antonio Banderas and Meg Ryan, however she neither sang for nor with them. Those she has sung backing vocals for include Tom Robinson, Pete Murphy, Tony Hadley and George Michael. Each experience taught her more about what it is to be a singer (not just famous, not a celebrity, a singer). A singer never gives less than her best, even when she is not centre stage. If one is fortunate a singer will get to do both; sing clever harmonies that make another sound great and stand – every once in a while – in the glare of a spotlight. Whether singing alone or in the company of others, every collaboration, every kind of collaboration, was done willingly and with gusto.

Check out the video page to see Ms Limerick in action.

Alison limerick will continue to work with like-minded people and will hope that audiences continue to enjoy the fruits of her labour.